on February 21, 2019
Blac Chyna and Soulja Boy are breaking up after dating for only a couple weeks ... ending a relationship that will go down as one of the fastest flings in hip-hop history. 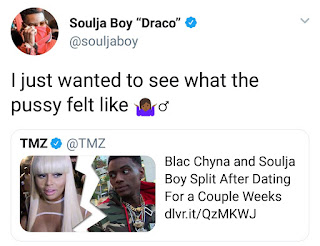 Sources close to the former couple reveals ... the relationship started to fracture after Soulja and Chyna got into a huge argument about Tyga. During the argument, we're told the duo started bickering about each other's true intentions in their relationship.

We broke the story ... the reason Soulja and Chyna started dating in the first place was revenge on Tyga. Tyga is Chyna's ex, and he just had major beef with Soulja. Now, it seems Tyga is part of the reason why they're throwing in the towel.

There are other factors involved in the breakup ... we're told Soulja and Chyna just weren't on the same wavelength, with Soulja looking for group hangs and Chyna preferring the Netflix and chill vibe. As a result, we're told BC felt SB wasn't ready to commit.

Say this for Soulja and Chyna ... they squeezed as much out of their abbreviated relationship as they could. They hit up some Grammy parties together, spent a day getting mani-pedis, and went on a huge Valentine's Day shopping spree!!!

We're told Soulja showered Chyna with $20,000 in gifts on V-Day and they had a fun night ... but it wasn't enough to keep the relationship alive.

The good news ... we're told the breakup is totally amicable, and there's a chance they might try their luck again in the future.

However,  SB who reacted to the news on twitter said that he just wanted to see what the pussy felt like

Below is the screen grab: