"I Have Not Resigned" - Vice President Yemi Osinbajo Openly Declares

Following unconfirmed news and rumors that vice president Yemi Osinbajo has resigned from his seat, he has openly debunked such news. 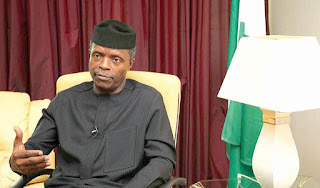 The vice president took to his twitter handle to announce that he has not resigned and that any such news of his resignation is misleading and fake.

Misleading/FAKE news is on the rise especially in this season when Nigerians will make a choice about who will govern them for the next four years.

I have not resigned!

I remain committed to the service of the Nigerian people under the leadership of President Muhammadu Buhari.

We should however recall that some members of the opposition parties have claimed that the VP is currently in a tog of war with the alleged cabals controlling this present administration.
Labels: 2019 election APC News politics resignation yemi osinbajo