"I Will End ASUU On My First Day In Office, If I'm Elected President" - Atiku

on February 04, 2019
The presidential candidate of the Peoples Democratic Party (PDP) and former Vice President of Nigeria, Atiku Abubakar, has pledged to end the lingering strike by university lecturers in the country, from his first day at work, if elected the next president of the country. 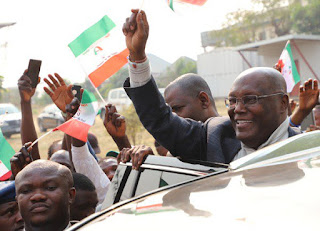 The presidential candidate made this disclosure in Lagos, Sunday evening, at the Silverbird Man of the Year event.

According to Abubakar, the industrial action which has denied university students in the country access to education for a period running into four months is disgraceful and thus will receive his first attention as president if voted into office in the February 16 presidential election.

“I am aghast that as I speak, our students across the nation are not being educated due to the ASUU strike caused by an unresolved debate of about N60 billion.

“If I get the job I am seeking, my first task on day one – along with naming my cabinet – will be to end this disgraceful strike and get our students back to their studies.”
2019 election ASUU STRIKE Atiku News politics