on February 21, 2019
The Presidential candidate of the People’s Democratic Party (PDP) Atiku Abubakar on Wednesday in Kaduna reiterated his resolve to privatise the Nigerian National Petroleum Corporation (NNPC), if elected President on Saturday. 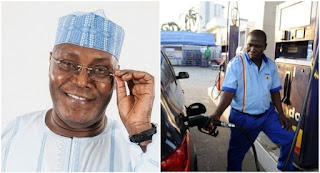 Atiku, who reiterated this while interacting with stakeholders from the 23 local government areas of Kaduna state at the trade fair complex, said his resolve to sell national assets was informed by the fact that NNPC has since inception 1963 failed to meet its expectation of refining crude oil for the country’s consumption.

He insisted he will sell off the NNPC to provide more development, stressing his decision is against the backdrop that only very few are benefiting from the operations of the national asset at the expense of the masses.

Atiku challenged President Muhammadu Buhari, who doubles as the Minister of Petroleum, to relinquish the running of the NNPC to ordinary people to show his level of sincerity.

Contrary to the widespread spread rumors that he will sell the NNPC to himself, the former Vice President said: “The NNPC will be sold to Nigerians with money to buy it.”

He explained: “Its 63 years Nigeria found crude but up till now we are yet to refine petrol and kerosine by ourselves.

“We have refineries in Kaduna, Warri and Port Harcourt but saboteurs stopped them from working.”

He also said his government will not be run by any cabal such as experienced by the present government.

He averred that the present government of the All Progressives Congress (APC) has inflicted the nation with pains and poverty because according to him, the President is not in-charge.

Speaking on the President Muhammadu Buhari’s recent security directive on ballot snatching, Atiku said PDP will not tolerate any form of ballot snatching and indulge in any act whatsoever against the electoral law.

He insisted the order to kill any ballot box snatcher is undemocratic.

The National Chairman of the PDP, Prince Uche Secondus, told the state stakeholders to resist every form of provocation to warrant postponement of election in the state.

According to him: “The governor is running from one place to another seeking federal support to shift election, all such efforts will fail.

“I urge us all to be resolute to vote Atiku Abubakar in the coming election and all other candidates of the PDP in all the elections.

“Resist all forms of provocation, because what the government of the day wants is to cause violence so as to shift election particularly in the strong holds of the PDP, we must not fall for their plans.”