The presidential candidate of the Peoples Democratic Party (PDP) in yesterday’s election, Atiku Abubakar has expressed optimism that he will win, following the results that have trickled in so far. 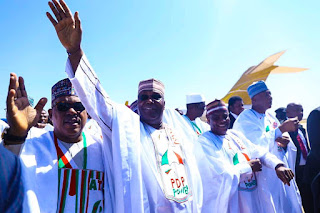 Atiku, a former Vice President, however, asked his All Progressives Congress (APC) counterpart, President Muhammadu Buhari to prevail on some bigwigs in his party to ensure that nothing went wrong in the collation process.

Atiku commended Nigerians for turning out in their large numbers to vote for him.

He said the initial indications from the PDP’s Simultaneous Vote Count (SVC) showed he would win the poll.

Atiku further urged Nigerians to make sure they monitor the collation process across the nation as he believes that a fair and credible process will make him victorious.