"No PVCs No Communion" - Catholic Priest Tells His Members

AHEAD of the forthcoming general elections in the country, Parish Priest of the Church of the Annunciation, Arab Road, Gbazango, Kubwa Abuja, Rev. Father Kwaggas Matthew has told members of his parish to start coming to church service with their Permanent Voters Card, PVC. 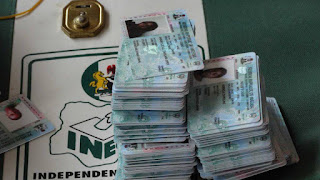 The Michika born cleric in Adamawa state, told his parishioners that any member especially the communicants that did not come to church with his or her PVC will be starved of the holy communion.

The vocal priest who had at the inception of the present administration in the country criticised the former government of allowing looting of the economy to take place in a large scale and had commended the administration of President Muhammadu Buhari has of late expressed disappointment with the administration.

The fiery priest condemned what he described as lukewarm attitude of the government over the killings of innocent Nigerians especially Christians in the North central by suspected herdsmen while the Indegenous People of Biafra, IPOB was proscribed by the government as a terrorist organisation.

According to him, “Next Sunday, no PVC, no communion. If you have PVC and refuse to vote, you allow evil to prevail. Intensify your prayers for I peaceful conduct of the election come Saturday 16th February.