The Lagos State police command has arrested a 32-year-old man identified as Prince Chinecherem believed to be the leader of a gay group, for engaging in homosexuality and infecting a 13-year-old boy with HIV. 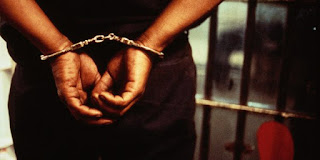 The Commissioner of Police in Lagos, Mr Imohimi Edgal told journalists on Thursday at the State Police Command’s Headquarters, that the suspect was arrested after the boy was seen sneaking out of his room.

Edgal explained that Chinecherem was using the teenager as a commercial sex worker. Not only was Chinecherem having sex with the boy, he was also pimping him out to other gay men.

Edgal said the incident occurred at Ejigbo area, a suburb of Lagos.

He said “On Tuesday, January 22, a 13-year-old male was seen sneaking out of the house of one Prince Chinecherem, 32, in a rather suspicious manner.

“Curious neighbours accosted the teenager and asked what he had gone to Prince Chinecherem’s house to do. He could not give a satisfactory answer.


“So they asked him to open up the nylon bag in his possession which contained freshly used condoms filled with semen. At this point, the boy revealed that Prince Chinecherem was his lover.

“The matter was immediately reported to the Police at Ejigbo Police Station and the said Prince was arrested for interrogation.After a preliminary investigation, the matter was called for further inquiry by the Gender Section of the Command.

“Both the suspects and the survivor were taken for medical examination and the result revealed that the survivor has long been introduced to homosexual act.

“The worst is that both of them are infected with HIV virus which causes AIDS.”

Edgal added that the suspects would be charged to Sexual and Special Offences Court in Ikeja and that the boy had been sent to health counselors for health talk on how to manage the situation.
Labels: crime HIV infection Lagos News police sodomy teenager