on February 23, 2019
The Commissioner of Police in Kogi State, Hakeem Busari, has confirmed the killing of a voter at a polling unit in Anyigba Dekina Local Government Area of the state. 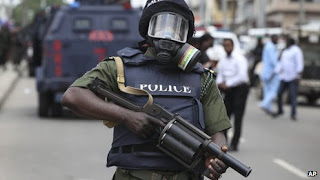 Some suspected thugs were said to have gone from one polling unit to another shooting sporadically and scaring away people who had gathered to cast their vote.

It was in their bid to snatch a ballot box at one of the polling units, that the voter was hit by a bullet and he died in the process.

The police also confirmed that killings and violence has marred the electoral processes in states like Oyo,  Lagos,  delta and Rivers as many have been feared dead in these states.
2019 election 23rd February News politics