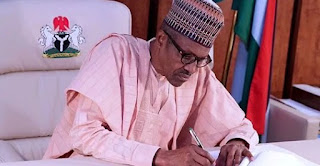 Buhari who stated this during his campaign rally at the Sani Abacha Stadium, Kofar Mata, in Kano added that he was prompted to seek re-election because of his passion and commitment to correct the ills bedevilling the country.

Buhari was received in Kano by a thunderous crowd as many people lined-up on highways while others besieged the venue of the rally.

“I was a governor, minister and Head of state and now a president. So, I need nothing less than to ensure that Nigeria attains greatness,” he said.

“There is nothing new I will tell you but I am here to thank you for taking the pains to wait patiently to see me,” he said.

Buhari who promised continued support for potentials in agriculture in Kano and across Nigeria, added that the decision by the Federal Government to ban the importation of rice had yielded good results.

The National Chairman of the APC, Adams Oshiomhole, said there was no need to rig the February 16 election to win the presidential election, saying President Buhari had done a lot to get a second term.

According to him, “We will not rig…We will defeat the candidates of opposition political parties in the poll. Those who abused power and deceived Nigerians during the previous elections are all out to diminish the good image of Buhari, but it is the greatness of God that will bring Buhari to power for the second term.

“The outcome of the recent presidential campaign is a clear testimony that Buhari has already won the election. Atiku has again made another mistake in life by picking obi as running mate,” he said.

He commended Gov. Abdullahi Ganduje for the various development projects he had executed in the state which he said were there for all to see.

Gov. Ganduje thanked the Federal Government under the leadership of President Muhammadu Buhari for the various projects it was executing in the state and Nigeria.