Prof. Osinbajo Reveals How God Saved Him When His Helicopter Crashed

Vice President Yemi Osinbajo has given a testimony on how he and other nine crew members survived when a helicopter conveying them crash landed at Kabba, Kogi State on Saturday afternoon. 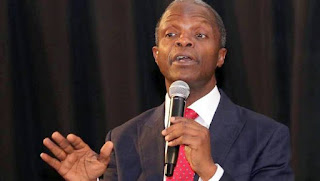 Osinbajo spoke on Sunday during a thanksgiving service, held at the Redeemed Christian Church of God (RCCG), City of Grace Mega Parish, Lokoja.

He said prior to the incident, he had met with the General Overseer of the Redeemed Christian Church of God (RCCG), Pastor Enoch Adeboye who passionately prayed and declared that, “God, please, protect this my son (Osinbajo) and let nothing happen to him”.

He said when the helicopter crash landed, it quickly dawned on him that God had led Pastor Adeboye to pray for his (Osinbajo) miraculous deliverance and those of the other crew on board.

Osinbajo said, “Only God can take the glory for saving my life and that of the nine crew members on board”.

According to Osinbajo, amongst the other nine crew members that survived was his blood brother of same mother and father, saying that it would have been double tragedy for his immediate family and the nation at large were it not for God’s intervention.

He said that it would have been a breaking news on local and international media that “VP Osinbajo and nine crew members died in a helicopter crash”, but God averted it in his mercy.

“No amount of thanksgiving and praises to God would be enough for saving my life and nine crew on board.

“God is the One who can do all things, and only him can take the glory; we return the glory back to him.

“We are here to say thank you, thank you Jesus. We bless his name forever and ever”, he said.

He prayed God to bless all the people that have celebrated with him in the state, the nation and the world at large.

Earlier, in a live telecast from the RCCG HQ, Lagos, the General Overseer of the church, Pastor Enoch Adeboye, asked the congregation to rise and give glory to God for saving the life of his son, the VP, Yemi Osinbajo from a crash.

According to Adeboye, the devil wanted to take the life of the VP, Yemi Osinbajo, but God put the devil to shame.

He, therefore, asked the congregation to specially appreciate God on behalf of the VP and all the crew on board, for his supernatural protection, saying Nigeria would not mourn.

In his sermon, entitled: “Carriers of Glory”, Adeboye, said for anybody to carry glory, he must be a true child of God and live a life of holiness.

“As a carrier of glory, anywhere you arrive, the darkness will automatically disappears.

“When God begins to use you, the glory belongs to God and not you, so you must learn to always give glory to God.

“Do not to take the glory to yourself because it is not yours, belongs to God,” Adeboye said.

Speaking during the thanksgiving service, Senator Smart Adeyemi, said there was every reason to thank God, adding that the survival of the VP and other crew members was manifestation that with God all things are possible.

“We are here to celebrate. What happened yesterday would have consumed the lives of everybody that was there not just the occupants of the helicopter but including those of us that were around on ground to receive them.

“The plane landed on a vehicle. The propeller of the helicopter hit about two other vehicles which could have gone into flames and probably consumed every one of us that were there”, he said.

Adeyemi prayed that God will continue to protect the vice president and all other politicians as they move from one place to the other in the cause of their campaigns.