"This Will be My Fifth & Last Election To Contest, I Will Not Abuse The Constitution"- Buhari

on February 11, 2019
The Presidential Candidate of the All Progressives Congress, APC, President Muhammadu Buhari, Sunday vowed that the forthcoming 2019 presidential election would be the last he would contest. 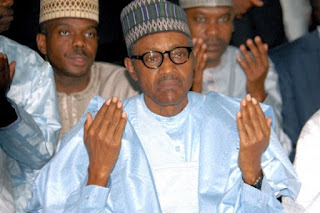 President Muhammadu Buhari while
Speaking at a meeting with the royal fathers in the Government House, Buhari promised not to abuse the constitution, noting that he would stop contesting after this coming election.

He said the 2019 election would be the fifth time he is contesting for Presidency.

Recall that Buhari ran for the office of the president under All Nigeria People’s Party (ANPP), in 2003 and 2007 and failed. He changed to Congress for Progressive Change (CPC), in 2011 and equally failed.

But in 2015 when he changed to APC, he won and took the mantle of leadership from Ex-president Goodluck Ebele Jonathan.

President Buhari said he was contesting this election as his fifth and the last, because as he noted, “a second term is what the constitution allows, and I will not abuse the constitution.”
2019 election News politics president BUHARI