on May 12, 2019
In the late hours of Sunday 12th of May 2019, a young boy named Victor has attempted to commit suicide due to his low performance in the just released 2019 utme results. 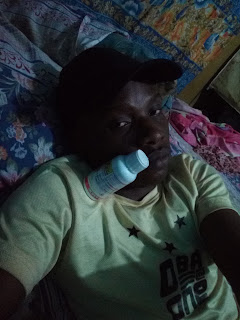 Victor who started a live video on twitter recorded himself with a bottle of sniper (a chemical used for killing insects) and a sachet of milk before he finally mixed the two together and drank it.

Earlier  twitter posts made by the boy shows that he hails from Ogun state and he lives with his single mother who had separated from his dad after he died.  It was gathered from twitter that The young lad and his mother live a very wretched life as they have no means of sponsoring his education.

In another post he made earlier yesterday,, he posted a picture of himself with a bottle of Sniper and added the caption:

“This thing go sweet oo. Y'all should at least make this fun for me by 9pm pls. Tune in and wish me Luck .”


At 10:01pm he began the Twitter live stream which lasted for 16 minutes 28 seconds. Segun who seemed not to be dissuaded by the series of pleas from Twitter users who took to the comment section of the stream to appeal to him not to take his life

Despite several pleas from Twitter users in the comment section of the live stream, Segun ignored all as he was seen mixing the substance with a powder milk in a cup, he thereafter drank it and lied on his bed groaning in pains.


Few minutes later, he ended the live stream himself.

Reports coming in however confirmed that he may be able to  survive the effect of the poison he took.
general jamb News suicide twitter utme