Ighalo Is Of Little Or No Relevance In Manchester United Squad; See Why.

Former Nigerian international, Victor Ezeji, has told Manchester United striker, Odion Ighalo, that the time has come for him to seek a move away from Old Trafford. 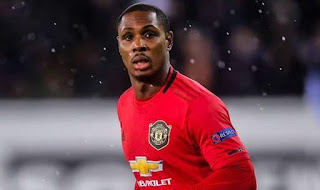 Ezeji stated this ahead of Man United’s Premier League clash against Crystal Palace on Saturday.

Ighalo impressed for Man United in cup competitions, but he is yet to play up to 25 minutes in a single Premier League match for the Red Devils.

His arrival from the Chinese club, Shanghai Shenhua, in January raised eyebrows, but the 31-year-old responded with five goals in eight games in the Europa League and FA Cup.

Ezeji told Goal: “Every coach believes in his starting XI and to be very fair to Ighalo, and the COVID-19 situation didn’t help him, because if not for COVID-19, Rashford would still have been out until the end of the season.

“And when Rashford recovered, because of the belief Ole has in Rashford, he had to bring him back into the team.

“And then you can see that Martial was firing on all cylinders, same as Greenwood, so there was no way Ole was going to drop any of those guys for Ighalo.

“It was not really nice that a player’s contract was renewed and you did not even allow him to play up to 20 minutes of any Premier League game. That isn’t encouraging. It makes a player lose all the confidence he has built over time.”

“If Ighalo still had regular games to play, probably his confidence would’ve grown, and probably Manchester United would have even tried to buy him permanently, but that did not happen,” he added.

“Ighalo had to cut down his wages just to be in Manchester. I think he has achieved his dream of playing for them, but now it is for him to look elsewhere.”